FORMER US President George W Bush was a party animal in his younger days. One wild night with an Aussie legend came back to haunt him years later.

George W. Bush’s attempts to jkeep up with John Newcombe’s drinking, followed by his insistence on driving home, could have been far more costlySource:News Corp Australia

AUSTRALIAN tennis legend John Newcombe has lifted the lid on “party boy” George W. Bush and the drink-driving revelation that clouded his 2000 US presidential election campaign.

Bush, who served as president from 2001 to 2009, admitted to the drink-driving arrest that he kept secret for nearly 25 years just days ahead of the poll, after the story broke on US networks.

The incident occurred in 1976 near his family’s Kennebunkport summer home in Maine, and followed a night’s drinking with Wimbledon champion Newcombe, who was also in the car.

Newcombe has kept quiet since on exactly what happened but told Melbourne commercial radio station SEN late Thursday that he was with the Bush family that night as a guest of George H.W. Bush, who was then director of the CIA. 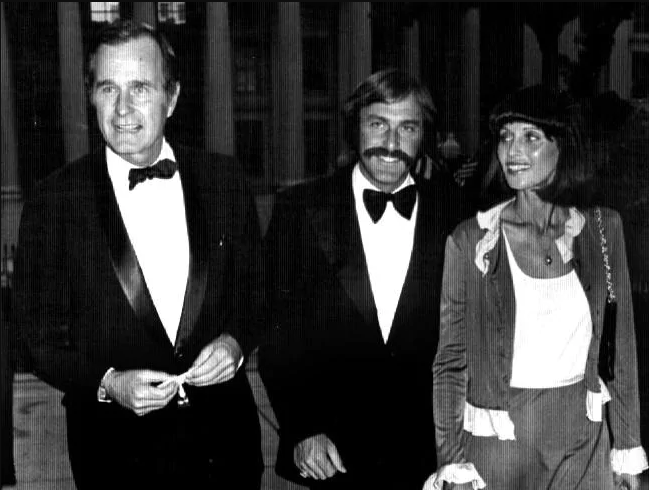 He had not met the younger Bush but they were similar ages — Newcombe 32 and Bush 30 — so “we went to the local pub”, along with Newcombe’s wife, Bush’s younger sister, and Peter Roussel, then press secretary to George H.W. Bush.

“George was a bit of a party boy in those days,” Newcombe said of George W. “I noticed that George was sort of eyeing me off,” he added as they began drinking “reasonable-sized mugs of beer”.

“I put on a bit of pace and he’d keep pace with me. A little silent game was going on.

“After about four of these, I picked the glass up in my teeth without my hands and sculled it straight down and I said, ‘What are you made of, George?’ And so he had to do that.”

Newcombe said he then drank another beer from the wrong side of the glass: “I looked at him and go, ‘Have you got any guts, George, or what’s your story?’ So he did that.” The pair staggered back to their car and Newcombe’s wife Angie offered to drive but Bush insisted he was fine.

“We had about three miles to drive down this road along the sea and after a about a mile he got pulled over,” Newcombe recalled.

“The cop got out of the car and made him walk the line and back and he kind of did it all right but he was a bit cheeky when he was doing it,” he said.

“The cop was writing him a ticket and then Peter Roussel got out of the car, and went over to the cop and was telling him he was George Bush’s son, and the cop, his name was Calvin, goes ‘Oh my God, I’ve just booked the son of the director of the CIA, I’m in real trouble.’ “But he’s written the ticket.” Newcombe said the pair would joke for years that “Calvin’s going to come back to haunt you”, and eventually he did with the story breaking during the presidential campaign.

Newcombe said Roussel called his Sydney office when the story broke. “He says ‘Newk, George just rang me, and he said they found out about Calvin.’”

The phone call prompted Newcombe to flee as reporters swarmed his Sydney office. Bush, who was fined US$150 over the offence, gave up drinking in the 1980s.